Plus one Face for Redemption. 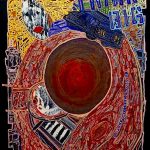