The Sisters Of Perpetual Pleasure Gave Me Great Pain. “The Sisters Of Perpetual Pleasure Gave Me Great Pain.” By Victor-Hugo Vaca II The following commercial was aired on The Rush Limbaugh Show, The Sean Hannity Show, The Bubba The Love Sponge Show and other popular conservative radio-talk-shows, to promote the controversial, “Crackhead Jesus: The Second Coming“, exhibit when it was extended again, long after Art Basel Miami Week had ended, to run through the Winter Music Conference (WMC), in order to accommodate growing crowds and public interest through word of mouth.

A fleet of over fifty, “Crackhead Jesus Cabs“, picked up passengers from Miami International Airport to Palm Beach International Airport and everywhere in between, for over two-months, promoting the Modern Art Music Movement™ spectacle, featuring Happenings with live performances by the Maverick Artist Victor-Hugo with special musical guests from around the globe and featuring his diary of the world on canvas known as, modern-art-gonzo-journalism.

As seen in print newspapers, television and heard on national radio talk shows the “Crackhead Jesus: Second Coming Exhibit”  was extended for 5 weeks due to popular demand and witnessed by millions due to press coverage and high-volume pedestrian traffic on Lincoln Road. Here’s a snippet of what the public saw, in the world-famous jet-set playground in South Beach, Miami, within the winding labyrinths of creativity, adorned by Victor-Hugo’s diary of the world on canvas, displayed within the legendary multi-level, multi-room venue, Buck 15 on Lincoln Road. 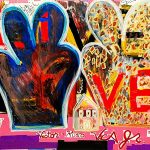 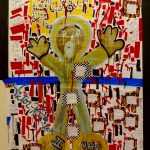 Walking While Black In A Hoodie While Eating Skittles.
Menu