Emancipate Yourself From Legal Slavery. “Emancipate Yourself From Legal Slavery.” By Victor-Hugo Vaca II As seen in the news and in the award-winning motion picture, “The Last Hit”, this work of art was manifested in front of a live audience at the Modern Art Music Movement™ “Live Earth 7-7-7 MAMM Jam” at Grass, in Wynwood, Florida.  The largest official South Florida Earth Day event, featured seven artists and seven Dj’s MAMM Jamming in the Miami Arts District, to raise awareness about living peacefully in an eco-friendly world.

The following article by Christopher Simmons was published July 1, 2007 in “Musewire“, the arts, culture, music and lifestyle magazine.

NEW YORK, N.Y. — Dark horse U.S. presidential candidate and controversial modern artist, Victor-Hugo Vaca Jr., sees Live Earth as a living breathing work of Modern Art. How can the world participate in the largest self-destructing Modern Art Project ever created? By passing along a simple message and asking friends and contacts to pass it forward people can create and participate in a peaceful human work of improvisational Pop Art better known as a “Happening.” Your participation can create a chain of events which may link the founder of the internet with the Founder of the Modern Art Music Movement (MAMM).

This butterfly effect could cause popular, but unregistered, presidential candidates Al Gore and Victor-Hugo to be on stage together introducing Duran Duran at the 07-07-07 Live Earth Concert.

Al Gore is registered Democrat and Victor-Hugo is registered Republican, but both men are putting their political views aside to help raise awareness about Mother Earth’s climate and the human condition in Darfur.

Together, the Latino dark horse U.S. Presidential candidate and the former Vice President are attempting to create an unprecedented work of art on a massive global scale the likes of which humankind has never seen.

In 1959, American artist Red Grooms role-acted a pyromaniac escaping from a police officer trying to apprehend him in an old boxing gym. At the finale of the performance, Grooms dove into the arms of stunned onlookers who suddenly realized that they had become a participating audience, rather than a passive one.

MAMM representatives are contacting The Guinness Book of World Records to see if the Live Earth Day MAMM Happening can be recorded as the World’s Largest Modern Art Piece. The Live Earth Happening has already begun and will begin to self destruct on 07-07-07 in Sydney, Australia.

By passing along the following message, and asking contacts to pass it forward, participants will create a peaceful human communication chain using face-to-face interaction or modern technology like Apple’s iPhone, text messaging cell phones, or e-mail. “By doing this, you will have eliminated the gap between art and viewer otherwise known as actor and audience,” Victor-Hugo says, adding: “Enjoy making history. Pass it on.”

The work of art is in the private collection of Casey Lezell.

As seen in the award-winning feature-length action drama, “The Last Hit” available on Hulu, Amazon. 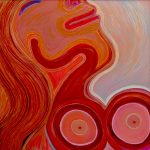 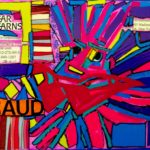 I Saw Two Men Kissing In Miami, Said The Spiritual Gonif To Baby-Mama#2 Outside Pulse Nightclub In Orlando, While Gay-Balloon-Boy Danced With Her Baby Daddy And A High-Heeled Transgender.
Menu