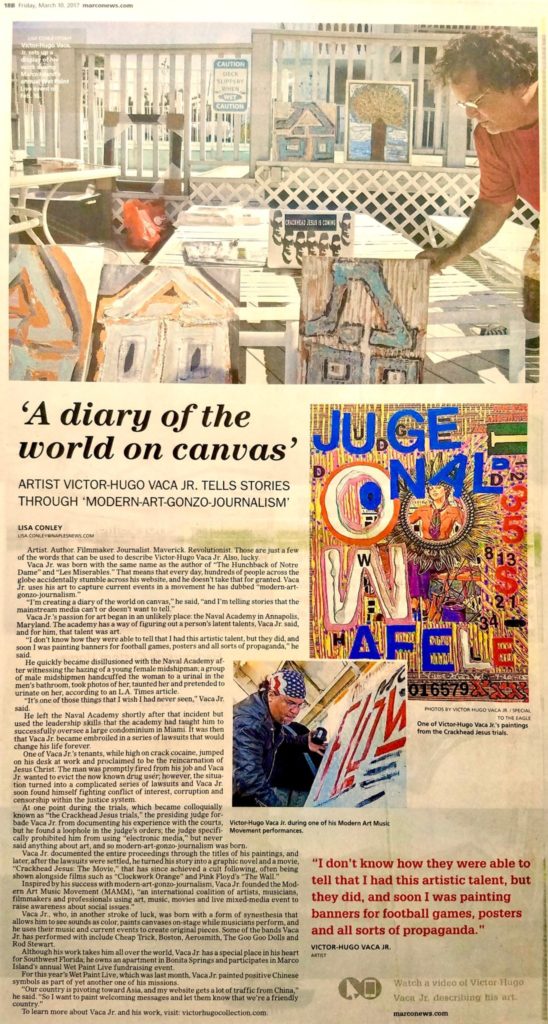 The revamped version of “Redemption: The Story of The Crackhead Jesus Trials” © will premiere soon, following the Letter to the Editor sent by the Maverick Artist Victor-Hugo Vaca Jr. to the USA Today Network, regarding a fake news headline substituting a factual news title, for an article by Lisa Conley.

The original version of the Crackhead Jesus saga, premiered to sold out crowds, at an interactive event, during Miami Art Basel Week in 2007.

The once censored story, about the birth of modern-art-gonzo-journalism in America, was inspired by Florida Court Case #50-2006-CC-016579, dubbed, “The Crackhead Jesus Trials”, by media outlets. 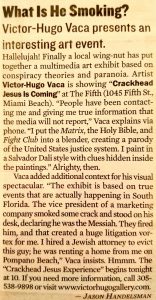 The contentious title character, Crackhead Jesus, whose name has slowly creeped into the vernacular as urban slang, meaning; hypocrite, scoundrel or devil, has been mentioned, uncensored, in several mainstream media news outlets, including: The Miami New Times, Suffolk Times, The Happy Herald, South Florida Gay News and on FOX News, with Megyn Kelly, as well as with subtle censorship, by the USA Today Network and The Palm Beach Post.

On March 13, 2017, the following letter to the editor was sent to the USA Today Network editors:

To Whom It May Concern,

Subtle censorship is a slippery slope, filled with false narratives that create fake news and collapse public trust in news media outlets. On March 1, 2017, the USA Today Network published an article by Lisa Conley on the worldwide web titled, “Artist Victor-Hugo Vaca Jr. paints ‘diary of the world on canvas‘”.

The popular article was quickly picked up by several news outlets including The Tennessean, The Naples News and The Marco Eagle. Kudo’s to Conley for succinctly communicating the concept of the Modern Art Music Movement (MAMM) and modern-art-gonzo-journalism for readers.

The truth is, my stage name, when performing in public with the Modern Art Music Movement (MAMM), is the “Maverick Artist Victor-Hugo”, whether raising money for charities and scholarships in Marco Island or awareness about rarely covered social issues in venues across the United States.

The editorial decision to change the true title to a fake news headline is concerning and of interest to the public trust because, if anything I was in Marco working to raise awareness about dubious newspaper headlines while raising money for educating future competent investigative journalists, like Conley, not visiting or vacationing, as the title implies.

It is curious, to say the least, that the USA Today Network would choose to bury a story about modern-art-gonzo-journalism, by purposefully changing the title to mislead algorithms and search engines, at the height of public interest. USA Today editors, using archaic, truth-defying-standards, appear to rationalize the perpetuation of false narratives, through misleading headlines, as a way of dumbing down the public. It is no wonder that smart readers have fled, in hordes, from subscribing to the poetic-misinformation peddled by newspapers as fact.

Rather than informing, the substituted headline, serves to confuse readers and fans, none of which know me as Vaca, with a nonsensical caption that buries the popular story on the internet; thus, depriving students researching emerging art forms and art movements of cultural significance in human history, during revolutionary times of change.

The headline presumes rather than informs and assumes that public trust in reporting is infallible. Furthermore, the substituted headline serves to fuel recent Gallup Polls that indicate waning public trust in mainstream news media because subscribers and readers are not as dumb as editors seem to think. If an educated consumer is your best customer, how can you expect to gain new subscribers if you continue to dumb down your audience with bogus headlines?

The question for USA Today editors who chose to burden Conley’s work with a fake news headline, five days after the real news headline premiered on the internet is: “Will the headline, ‘Willie Nelson at Artis-Naples’ eventually be changed to read, “Nelson Visits Naples” and will a performance by Lady Gaga, Sting or Cher in Marco Island receive the headlines, “Marco Visitor [Whatever Lady Gaga, Sting, or Cher’s Last Name Is] Sings Songs About Life”?

On March 14, 2017, editors at The USA Today Network changed the caption on Lisa Conley’s article once again. The third headline reads: “Marco visitor Victor-Hugo Vaca Jr. puts ‘diary of the world on canvas'”. 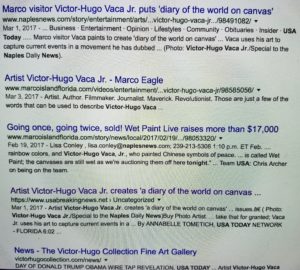 The new fake news headline, which corrects the artists name, still falsely suggests to readers that Victor-Hugo Vaca Jr., while on vacation in Marco, decided to put a diary of the world on canvas. The new, misleading internet headline, suggests to readers, that if Lady Gaga, Sting, or Cher were to perform in Marco Island, the Naples News headline would read, “Marco Visitor [Lady Gaga, Sting, Cher] Sings Songs About Life”.

It begs the question, “What was wrong with the original, honest headline, ‘Artist Victor-Hugo Vaca Jr. creates a diary of the world on canvas’, that editors felt compelled to change the caption for readers, not once but twice?”

If USA Today Network editors wanted to include Marco Island in the caption, all they had to do to keep readers truthfully informed, rather than woefully misinformed, was add the words, “in Marco Island”, to the headline, so that it reads: “Artist Victor-Hugo Vaca Jr. creates a diary of the world on canvas in Marco Island”. Instead, editor’s at the USA Today Network chose to confuse and dumb down audiences with misleading news headlines, again.

In tribute to the dumbing down of America through fake news headlines, the never before seen, updated version of the censored story about false prophets, lawyers and the birth of modern-art-gonzo-journalism titled, “Redemption: The Story Of The Crackhead Jesus Trials” ©, will premiere soon on www.victorhugocollection.com in anticipation of the modern-art-graphic-novel in print, released, in limited edition, at select outlets and on eBay. 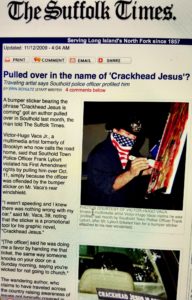 The first time, “Crackhead Jesus”, was heard on television around the world, was on FOX News, with Megyn Kelly, during a now infamous live interview, about censorship and the arts. 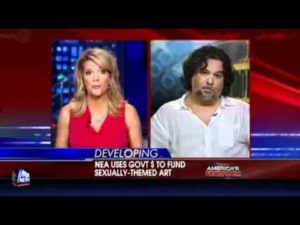 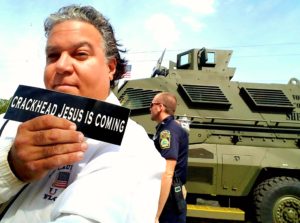 Happy Herald Cover Story Titled If A Picture Is Worth A Thousand Words The Artwork Of Victor Hugo Vaca II Speaks Volumes. 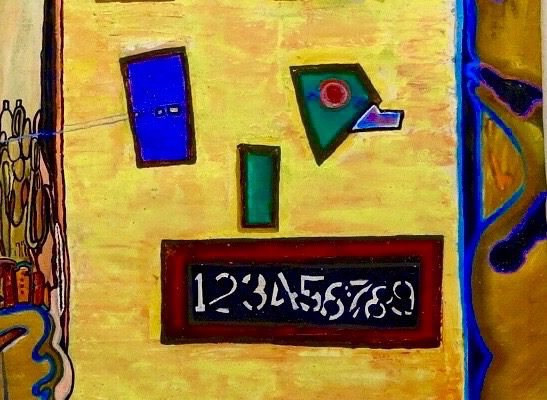 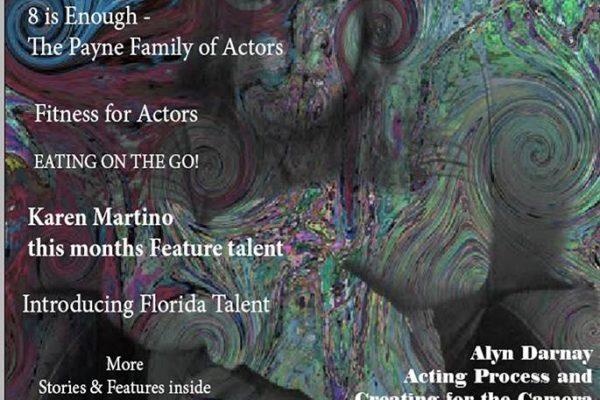