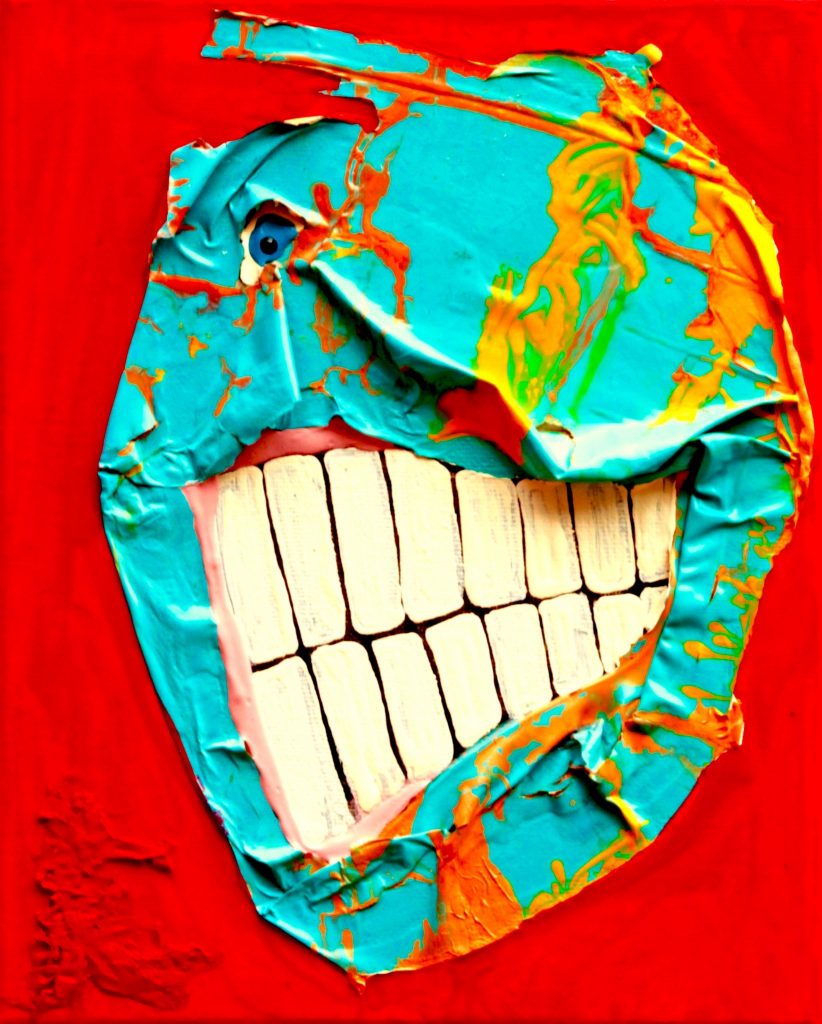 As a worldwide audience watches the violent results, of the U.S. justice system, collapsing under the weight of toxic government leadership, enabled by fake news media, that fails to hold anyone accountable for the blatant, Rule Of Law double standard, that has become, the new normal in America, James Comey, sets a dangerous precedent for everyone, by lying to Congress, undermining the Constitution and teaching all Americans, including Needy Latino’s and Super Predators, that the racist Democratic Party, in collusion with weak mainstream media news outlets, while under the toxic leadership of Barrack Hussein Obama, who preached hope as a false prophet, that denied his own Mother and his white heritage, in favor of undermining the Black community, for profit, alongside Loretta Lynch, Eric Holder and the  Clinton Machine mafia, that 0.01% of people in America can get away with murder and everything else, while the other 99.99% of the United Slaves Of America, live under strict Rule Of Law. 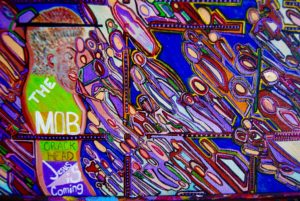 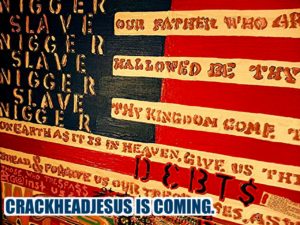 No justice, no peace.

When the head of the FBI, James Comey, became investigator, prosecutor, Judge and jury; minorities, who have been through the broken U.S. Justice system, took notice: ‘Needy Latino’s’ and ‘Super Predators’ knew instinctively, without propaganda, from mainstream media news outlets, that something was definitely wrong with the picture of Attorney General Loretta Lynch, in a private plane, on an Arizona airport tarmac, with Bill Clinton, days before an FBI investigation, into Hillary Clinton, was closed, without proper procedure, inquiry or prosecution referral. 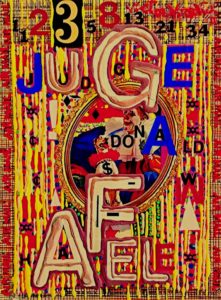 The FBI, under the toxic leadership of James Comey and the justice system, under the toxic leadership of Loretta Lynch, destroyed public trust in U.S. Rule of Law, by undermining the Hillary Clinton investigation. A multicultural mob of constituents is awakening to the fact, that the U.S. justice system is rigged, in favor an elite hand-full of people, who rule the world, like Crackhead Jesus, with a, ‘do as I say, not as I do’, philosophy. 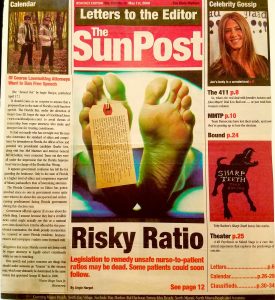 “Survival is based on common values and beliefs, not color. I learned that first-hand, at the U.S. Naval Academy and Prep School, in the 80’s and 90’s, when the military purged all maverick Alpha males out of service and left toxic leadership in command.”  – Victor-Hugo Vaca II 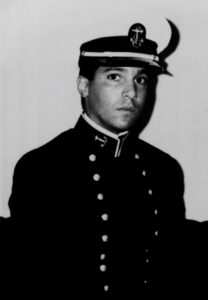 What do the hens do when the fox is guarding the hen house? Wake up, media! Crackhead Jesus is coming.

For years, news outlets have ignored warnings of the cataclysmic butterfly effect created by the dangerously low standard of competency and ethics for lawyers – those who grow up to be senators like Roland Burris or judges like Donald W. Hafele.

The controversial iNovel, Redemption: Episode One – The Story of the Crackhead Jesus Trials, was created to avoid threats of censorship from lawyers who did not want me to disclose the fact that I, unwittingly, discovered that lack of competency and ethics for lawmakers would lead to an economic disaster of global proportions.

Ladies and gentleman, now we are here. Why does the media continue to ignore the fundamental problem of what is transpiring in our once great nation? The lack of clear oversight for those who set the standard of competency and ethics for lawyers in the state of Florida and in other states is creating a tsunami of global distrust for U.S leadership and lawmakers.

Follow the trail of Judge Donald W. Hafele – from his appointment by Jeb Bush to the little known, three-member Fairness of Elections Committee in 2000, the year Democracy died, to the Jerod Miller case in which Judge Hafele publicly stated that it went against the fiber of his being to remove himself from a murder trial where the accused murderer was being defended by the Judge’s campaign treasurer in 2000.

After several documented warnings to Governor Charlie Crist’s office about the Judge’s corrupt fiber of being, Crist elevated Judge Hafele to a Circuit Court, where he now threatens the environment by creating a calculated delay in the Everglades’ case.

Why should anyone care about this? Because of the butterfly effect.

Elected representatives are ignoring the fact that no oversight exists over some of the 50 states’ Bar associations and that has lead to the breakdown of democracy – and is now set to breakdown the global environment for generations to come.

Elected representatives are ignoring the fact that a legal mafia exists in the United States, and it will not make things better.

With my birth name of Victor-Hugo Vaca Jr., my Web sites have gone viral on the Internet. Those who Google Victor Hugo, Modern Art, Judge Hafele, Conde and Cohen will be lead to the truth about what is really going on in this country.

Students from all over the world have begun to cite me in their school projects because I share the name of the great French revolutionary, Victor Hugo. The youth of our nation have given me a powerful voice, thanks to their ability to think outside of the box.

Clear Channel has agreed to post billboards and banners exclaiming, “Crackhead Jesus is coming (‘http://www.crackheadjesus.com‘)” during the Winter Music Conference in Miami Beach. I am not spending my money to create chaos or blaspheme any religious figure but rather to let the world know that the new Victor-Hugo has done his part in history as a patriot to defend and uphold democracy by thinking outside of the box and not with mere rhetoric.

ACCORDING TO COX COMMUNICATIONS, THE “CRACKHEAD JESUS CABS” WERE SO EYE CATCHING, EXECUTIVES CLAIM IT WAS ONE OF THE MOST SUCCESSFUL AND EFFECTIVE AD CAMPAIGNS, IN MARKETING HISTORY.

Mainstream media censored, “Crackhead Jesus”, which has since become part of the vernacular, representing a breakdown in the system, but with the advent of cell phone camera’s, tourists from around the world were able to disseminate images of the curious cabs globally, thus circumventing news media censorship and getting the message across that, civil unrest was coming to the United States, due to a breakdown in the U.S. justice system that favors elites over the 99% of law abiding citizens in America. 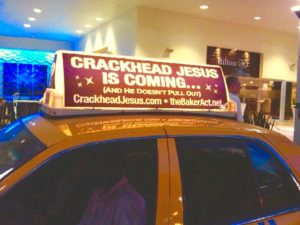 When President Barrack Hussein Obama laundered cash to pay ransom for hostages to the number one supporter of terrorism, Iran, it sent a signal to the world that the United States was prepared to negotiate with evil. 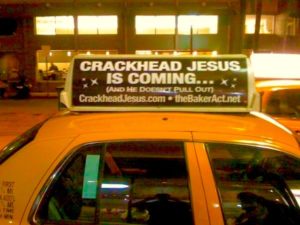 When FBI Director James Comey condoned acts of treason by Hillary Clinton, it signaled to the world that the United States government and justice system, is corrupt from the top down. 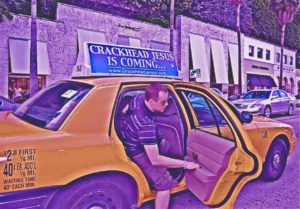 When the United States Attorney General, Loretta Lynch failed to prosecute Secretary Of State, Hillary Clinton for acts of treason, it signaled to the American public that there is a clear Rule Of Law double standard for the elite 1% in America. 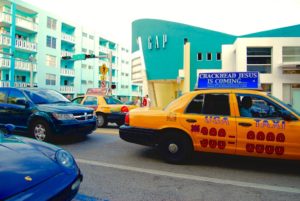 CRACKHEAD JESUS CAB, IN FRONT OF THE GAP, NEXT TO PORSCHE, ON COLLINS AVENUE, IN MIAMI BEACH, FLORIDA.

“Before you trust lies that spring up as news, trust your instinct and fact check, using the critical thinking skills God gave you.” – Maverick Artist Victor-Hugo Vaca II 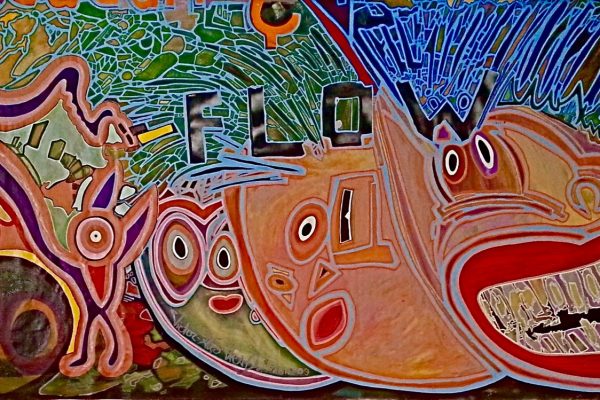 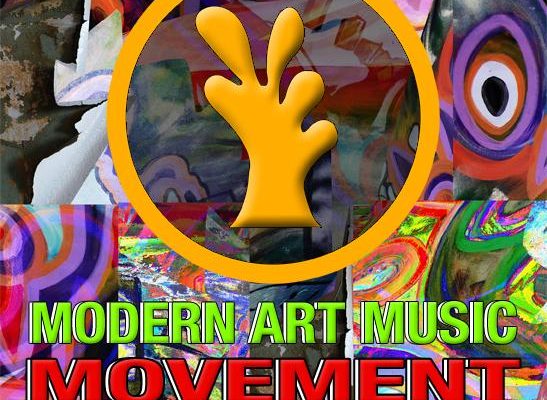 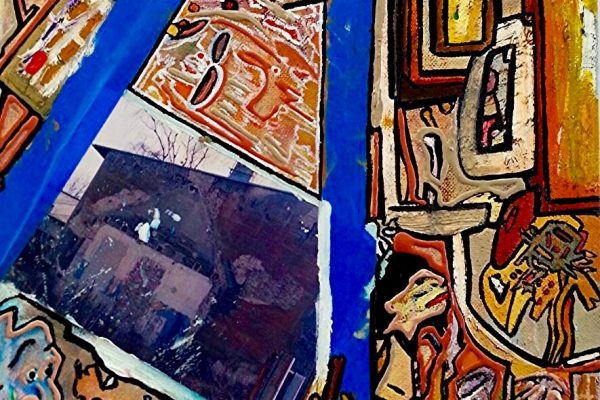